To my beautiful child,
We got all the rest of our medication on Friday which was contained in a big box on our front porch, so naturally I posed on the table with all of it. I’m not, like, a regular mom. I’m a cool mom.
I have 100% faith that you are going to come when you are supposed to, in the way that you are supposed to come to us. There is only one thing that gives me a pit in my stomach….the shots. I got a flu shot on Monday and it brought back all of the memories of the endless shots that I have to give myself. The process is no bueno (that means “no good”….see all of the cool things that I’ll teach you?!) You would think that it would get easier and I would get used to giving myself shots, but I don’t. There’s always this feeling of slight horror right before I stick the needle in and then I just have to move past this mental block, and do it almost without thinking. There isn’t another option though, so I do it, and like I’ve said before….you’re worth it! I expect you to pay me back eventually with as many foot massages as I ask for, however. I’m just saying; I’m not a saint.
I feel SO much better about the whole process this time around because I don’t feel like I’m living a double life trying to hide my doctor’s appointments from my co-workers and writing this blog like everything is perfect. I’M FREEE! I also feel like there are so many angels surrounding us. I know that God helps us through tough times by putting people in our lives to help us carry our burdens, and I’ve had so many people tell us that they are praying for us. I can feel it. It’s amazing. I’ve heard people say that they can feel others prayers working in their lives, and now I understand what they mean. I feel lighter this time around, like the weight has been spread across lots of backs and not just ours. It’s really cool. You have so many people rooting for your arrival.
I started doing acupuncture a couple weeks ago and just had my second appointment on Monday night. I felt like I was doing voo doo hocus pocus, but hey, I’ll try anything! Plus, the reflexologist that came to our house a few months ago (he goes to our church and offered to come over) said that the pressure point on my foot for my ovaries felt just fine but he sensed a problem with uterus. Low and behold a few months later, this new doctor found that I have endometriosis and two polyps in my uterus! So, you can say I’m a believer now. The acupuncture doctor tested my energy levels by having me hold this little metal thing and then testing the opposite side of my body, back and forth in different spots. Your energy levels are supposed to be the same on each side, but on most areas it skyrocketed on my right side so he’s going to try to balance it out.

My sweet friend Ashleigh (who has gone through IVF several times and is doing it again) had the polyps removed from her uterus last week and she said that the surgery wasn’t a big deal and that I shouldn’t be worried at all. That made me feel better! Here’s the plan for the next few weeks:

– Aunt Flo should be coming to visit this week and then I’ll start taking birth control upon her arrival. I hate it when she comes to town. I know I should be welcoming, but…nobody is perfect.
– Monday, October 19th – surgery at 5:30 AM to remove the polys, followed by a nice, long nap and then probably popcorn and Corn Nuts. I asked for ranch Corn Nuts after my last two surgeries…
– Start injecting myself with Lupron on the 23rd. Let the joyful times begin.

In honor of the exciting times of injecting myself with lots and lots of needles, I converted our guest bathroom into my “drug lab.” During the last two IVF cycles, I started referring to that bathroom as my drug lab because there were so many needles and injections. So…I decided to make it official this time. I put up a sign that says, “Jenica’s Drug Lab: Makin’ Babies Since 2015.” It kind of makes me smile every time I walk into the bathroom. I have to keep humor in this situation. Life is too short to feel sorry for myself.

Oh, and ps, and I uploaded a photo on Instagram on Monday where I pretended that I was holding a baby which was actually a giant zucchini from our garden. It was MASSIVE! I pretended it was you, and that we were excited for your arrival, but don’t you even worry for one second because that zucchini (although large and impressive) will totally not be as cool as you. Even though I grew it.

Oh, and you ask what Instagram is? Don’t ask. I forgot that by the time you read this you will probably be, like, telaporting to go talk to your friends. 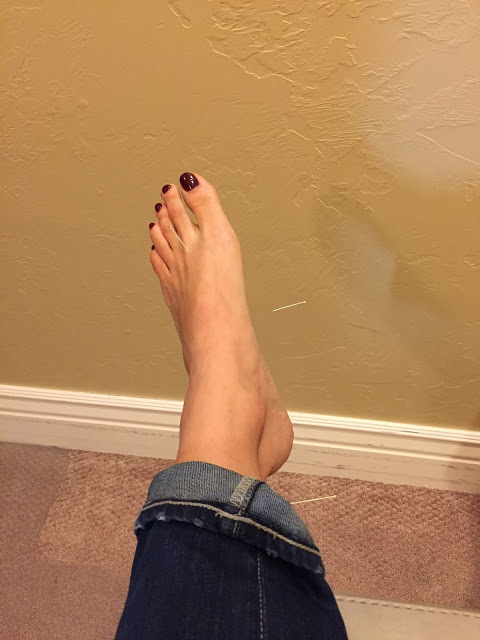