To my beautiful child,

So, to catch you up, I did my three princess days on February 18th, 19th and 20th. Dr. Foulk wanted me (and everyone else that he transfers embryos into!) to stay pretty still for 3 days because when he does the frozen embryo transfer, he puts the embryo exactly where it should be in the uterus in order to have the best chances of implantation. If I were, say, to go back to working out really hard the next day, it could shift the embryo so it’s not in the exact best spot. After the princess days and during them, I was feeling really crampy! I kept thinking to myself that it had to be working because there was no reason to be so crampy otherwise.

The kids were home from school on Monday which was President’s Day, so they came with me to my acupuncture appointment. They were so cute and it’s been so much fun to explain this whole process to them. I told them the needles didn’t hurt at all and it helped with blood flow to my uterus. Harris said sweetly to Goldie, “You’re going to have to do this one day, Goldie.” He’s perfect! I told them that not everyone has to do this to get pregnant, but some people do and that’s okay.

My IVF coordinator told me not to exercise for that week until after the blood test 10 days later to allow the embryo to implant in a more gentle environment. I had my business mastermind in Sacramento that I left for on Wednesday night which was perfect timing to focus on building Fearless Infertility and helping women through this experience. On Saturday at lunch, one of the women there (who has 6 kids) asked if I had taken a pregnancy test. I said no and that I hadn’t taken one with the twins, either! Later that day, I talked to my mom on the phone while I was on a brief walk around the pond and she asked if I was going to take a pregnancy test. Now I was really thinking about it!! Then I remembered that my step sister Tatum had taken pregnancy tests and had found out before her HCG blood test at her fertility center. Uh oh. You can see where this is going!

After dinner that night, I casually said to my friends, “Who wants to walk to Target to buy a pregnancy test?!” My cute friend Jennie filmed the whole thing which I’ll post on Instagram. I’ve been using the hashtag #fearlessivf and I hope other people start using it, too! I think I had purchased a few pregnancy tests before at the dollar store but hadn’t really ever had to buy them before that night. Think of all the money that us infertiles get to save not buying pregnancy tests. Ha! She’s got jokes, people. Infertility is anything BUT saving money!

I couldn’t find the pregnancy tests and had to ask a teenage boy, who was mortified I was asking him about this. I asked him where they were and he pointed in a general direction and said, “Were they not over there?” Ha ha ha poor kid! He helped me find them. They’re by the condoms just FYI. Go figure.

My heart was pounding as we walked back into our hotel. I texted my friends (and coach) Jody Moore and Tina Su and they both joined us as well. I got a brief rundown on how to successfully take a pregnancy test, walked into the bathroom and started peeing. Ha! As I was zipping up my pants and washing my hands, I glanced down and it almost immediately showed two lines. WHAT?!! I was pregnant?!!! I walked out, they looked and I just couldn’t believe it!!! Such a joyful AND crazy moment!

Jody filmed me as I FaceTimed Tyler. His first reaction was to think that I was joking with him (like I said before…I have jokes…but I wouldn’t joke with him about THIS! DUH!) I kept glancing to the side at Jody as she was filming me because he just kept talking and talking about taking Harris and Goldie to the BYU game. I had asked him a simple question and he kept going and going and I wanted him to stop talking so I could start talking! Ha! He saw my side glances at someone that he couldn’t see and thought it must be a joke when I told him. Since he was talking about the BYU game, I said, “Wouldn’t it be crazy to take THREE kids to the basketball games?” and then showed him the positive pregnancy test. Since he thought I was joking, he said, “Jenica, you’re not supposed to test early!” And then when he realized that this, in fact, was not a joke, he got excited. I then called my mom and step dad who were thrilled and then my sister Jocelyn who had the best reaction of all time. That girl needs to be a professional hype girl! She was jumping up and down and laughing and crying! It was so amazing.

We were still a little hesitant, however, because I had a chemical pregnancy after our second frozen embryo transfer in 2015 which happens when an embryo implants but stops developing. We hadn’t done genetic testing on our embryos back then, but we did this time (we defrosted them, biopsied them, and had our 7 remaining frozen embryos tested). We did that to prevent miscarriage because I didn’t want to put my body and soul through all of this just to implant an embryo that wasn’t viable for a live birth anyway. 5 of the 7 came back genetically sound. I didn’t think a chemical pregnancy would happen this time, but my blood test on Monday would confirm that my HCG levels were at day 10 normalcy for an embryo to develop.

This is just what happened! When I got the call after getting my blood drawn earlier that day on February 28th, I was sitting on my balcony enjoying the sun (with a blanket!) as I like to get my vitamin D and fresh air and there’s a spot on my balcony that blocks the wind so I can sit out there even when it’s pretty cold. If it’s sunny, I can feel not so trapped in this Utah winter weather! I was sitting out there enjoying my rest when I got a call from Danica! She confirmed that my HCG numbers looked good (I think they were around 250) and that I am pregnant! She didn’t get quite the reaction that I would have normally given (like I did give when I got the positive test on Saturday) and she asked if everything was okay, so I told her I had tested on Saturday and was pretty sure I was pregnant! She had watched my Instagram stories earlier and had told Shaun, my embryologist, “I bet she tested!” because I didn’t seem that nervous. Ha!! I gave in to Saturday’s peer pressure and it ended up being really fun but I was also prepared for the test to be negative because you can get a false negative. So all of this to say, I wanted to confirm my HCG levels to make sure they were on track, and they looked great!

I called Tyler who was thrilled, and we told Harris and Goldie that night when Tyler came home. We sat them down and they were excited, and when Tyler told them we were having a baby and that the frozen embryo transfer had worked, Goldie screamed! She was so excited! Harris was so excited too and asked it if was a boy or girl. Tyler told him we didn’t know yet and that we would do a gender reveal, and Harris suggested that we do it in our back yard. So cute! Goldie said she thought we should do fireworks. She rubbed my belly and put her face right to it. It’s going to be so much fun to see them through this process!!

It has been a THRILL to share this wonderful news with our family and friends! Goldie and I attended an event that night and a lot of my friends were there, too. Their excitement brought tears to my eyes! I have another blood test on Monday, March 7th and they will test to make sure the pregnancy is progressing well. At that point, my HCG numbers should be over 1,000. We are praying this pregnancy continues to go well!

I will say that I had a couple days of panic because my last pregnancy was really, really, really, really hard. My brain automatically wanted to run and hide because it sensed danger! Carrying twins and having preeclampsia was NO JOKE. Thoughts that have helped me a lot are, “This pregnancy will be completely different,” “My body is strong and capable,” and “This is temporary.” These thoughts have helped me a lot when I start to make up a story of a really hard pregnancy ahead. The story could ALSO be that this pregnancy will be incredible. I’m sticking with that. My mom has been so incredible at bringing me back to those helpful thoughts.

Oh, and for anyone reading this that isn’t my beautiful child (you know, the one I’m writing this letter to who is now residing as a tiny and growing fetus in my uterus), but IS experiencing infertility and doesn’t want to feel alone any more, come join me in my Fearless Infertility Movement Facebook group HERE. I’m so excited to get to know you and support you.

Well, baby! We will see you next week at the blood draw. Mama loves you. 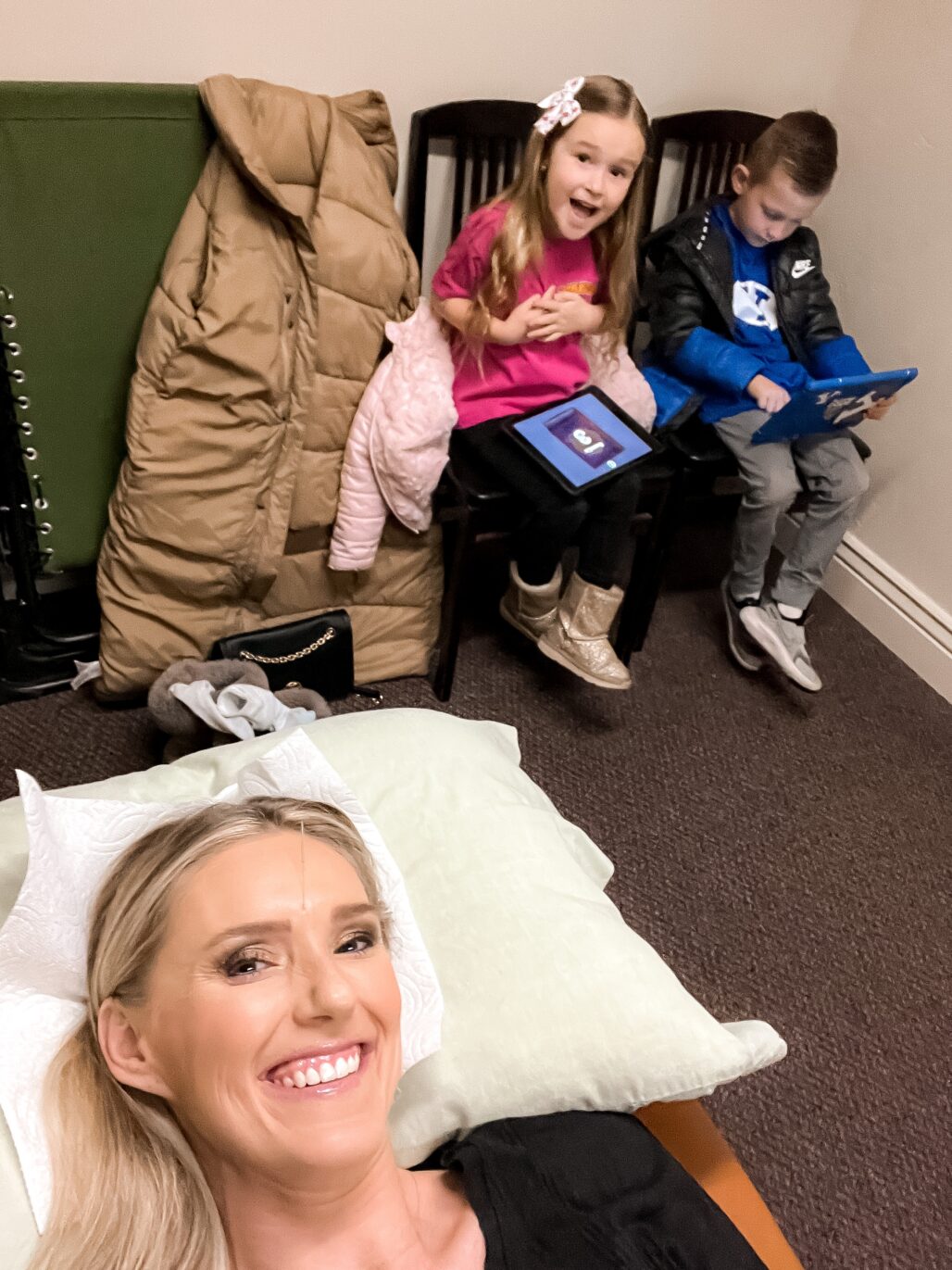 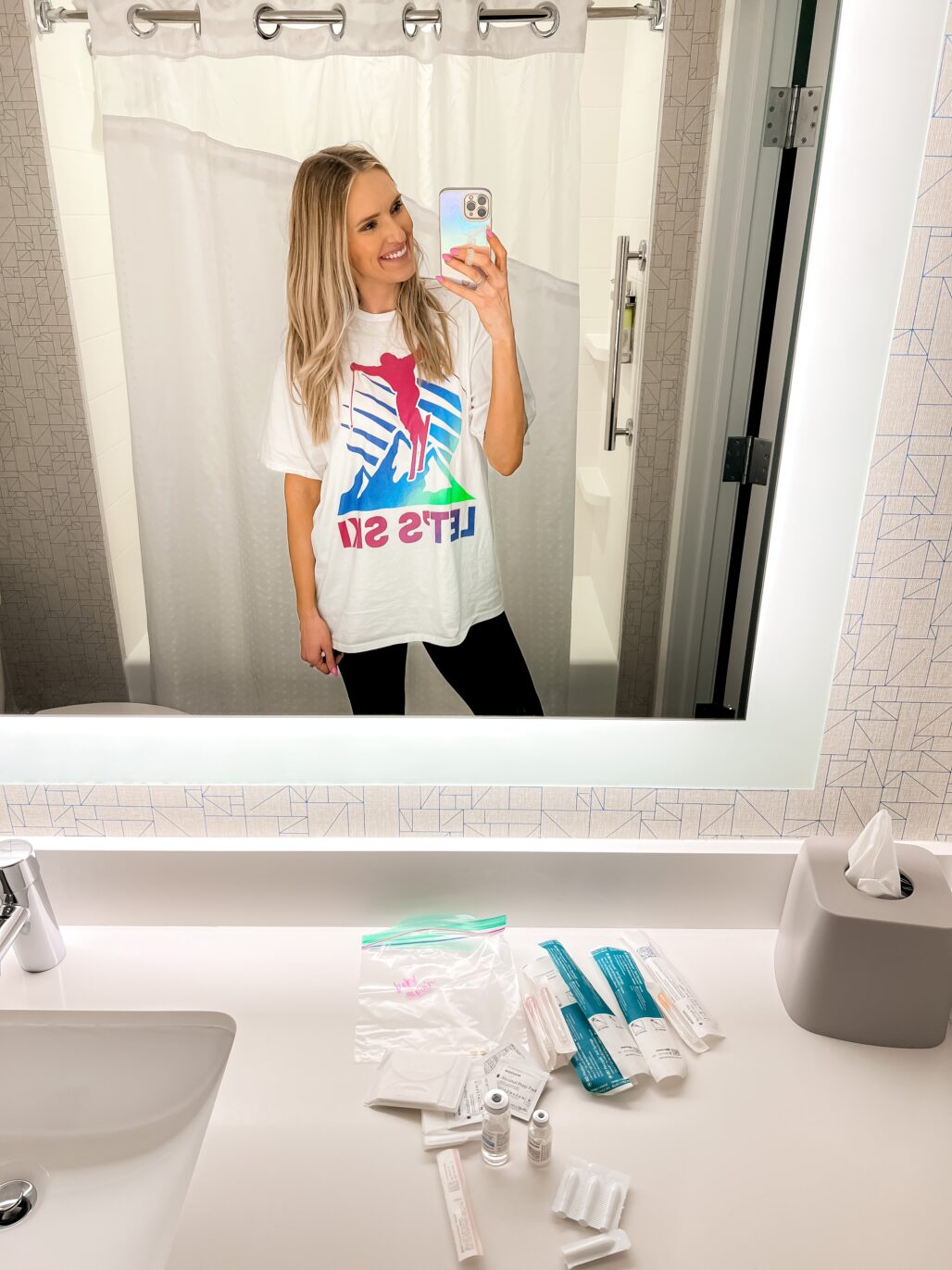 I’ve been adding all of my comfy oversized tees to my Amazon favorite’s page here! These leggings are the only leggings I have been able to stand on my bloated tummy. They have been amazing! I sized up one size so they feel like I’m wearing nothing and have no pressure at all on my belly. Lucky for me, oversized clothes are in right now! 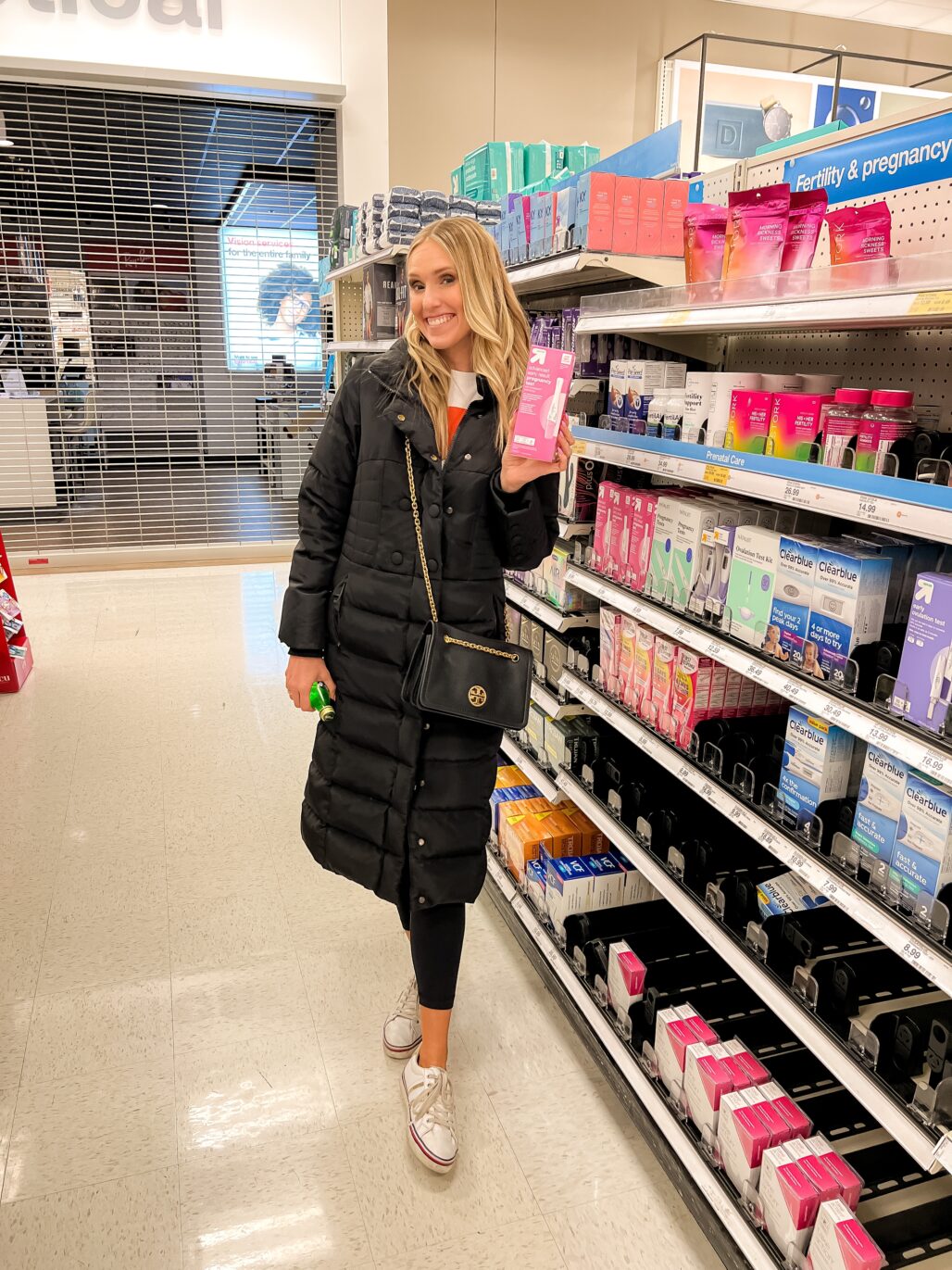 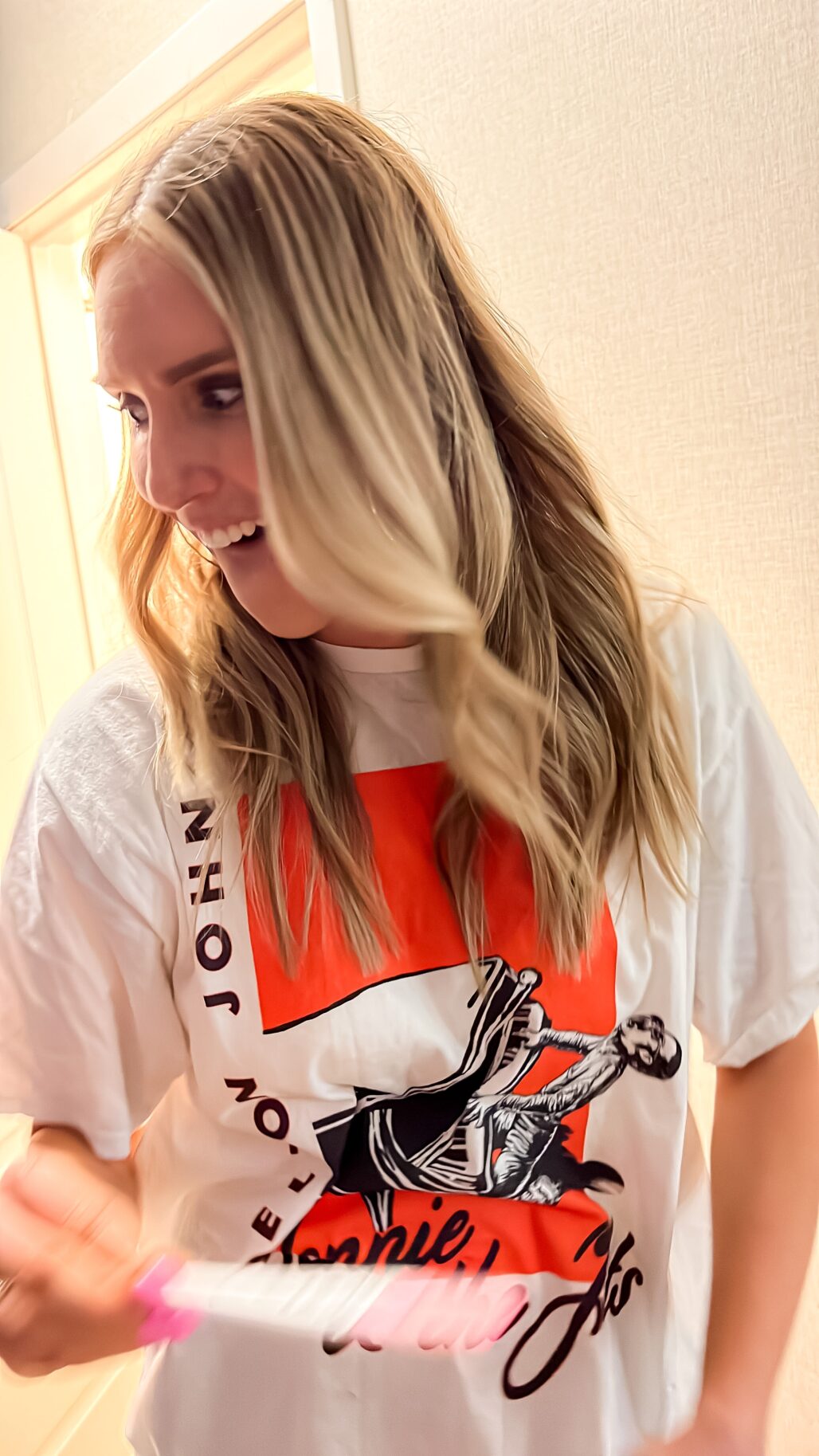 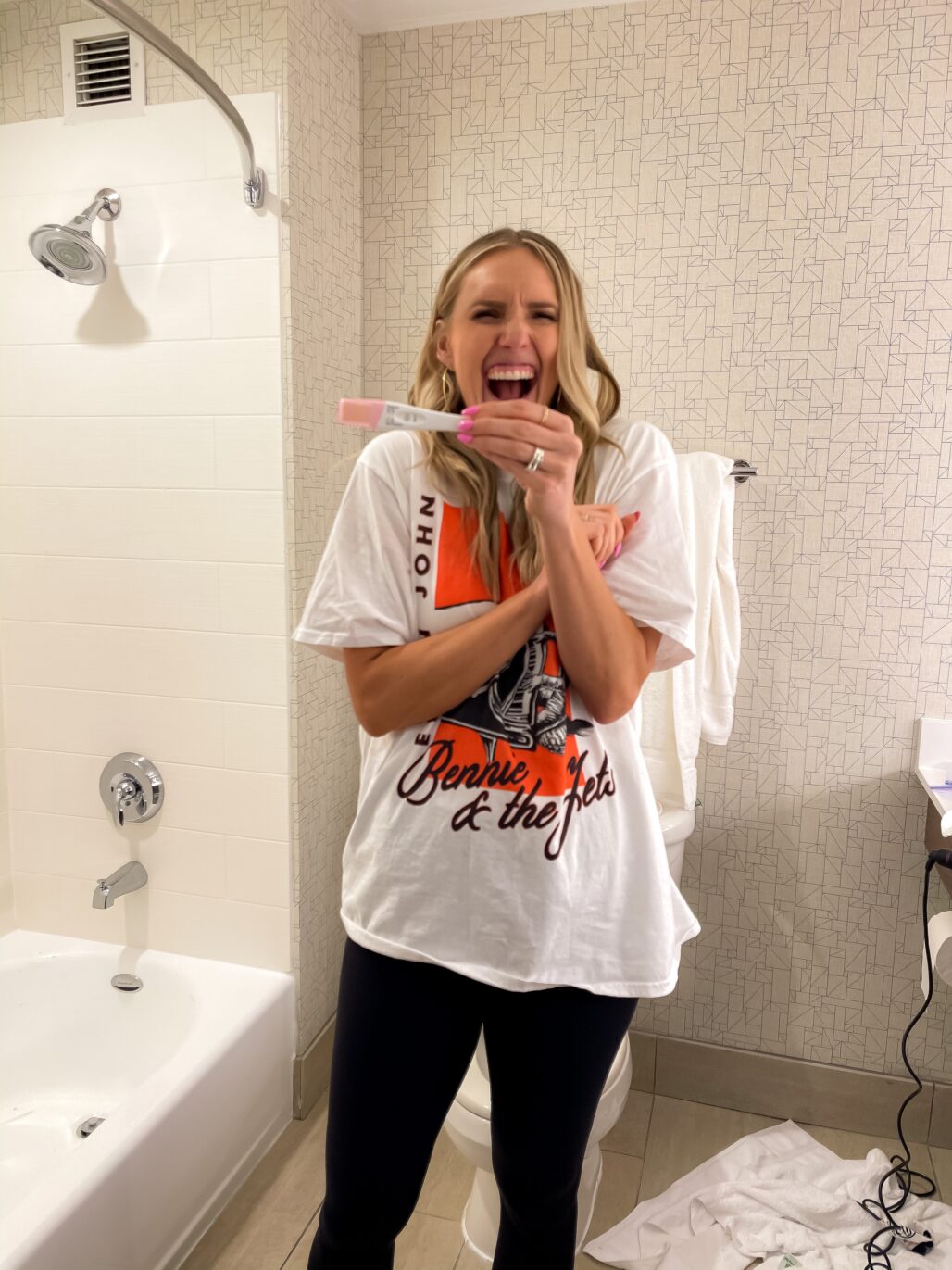 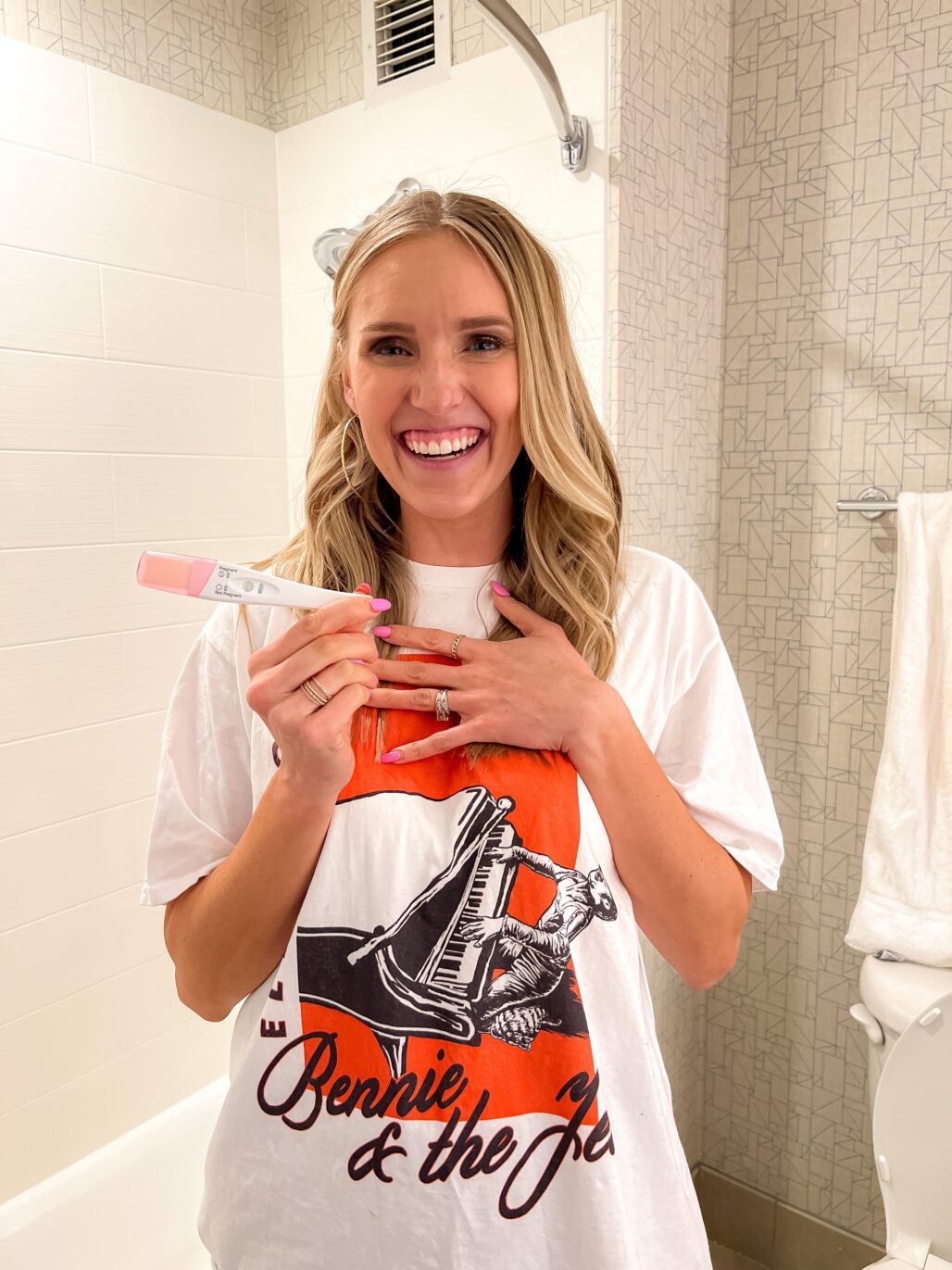 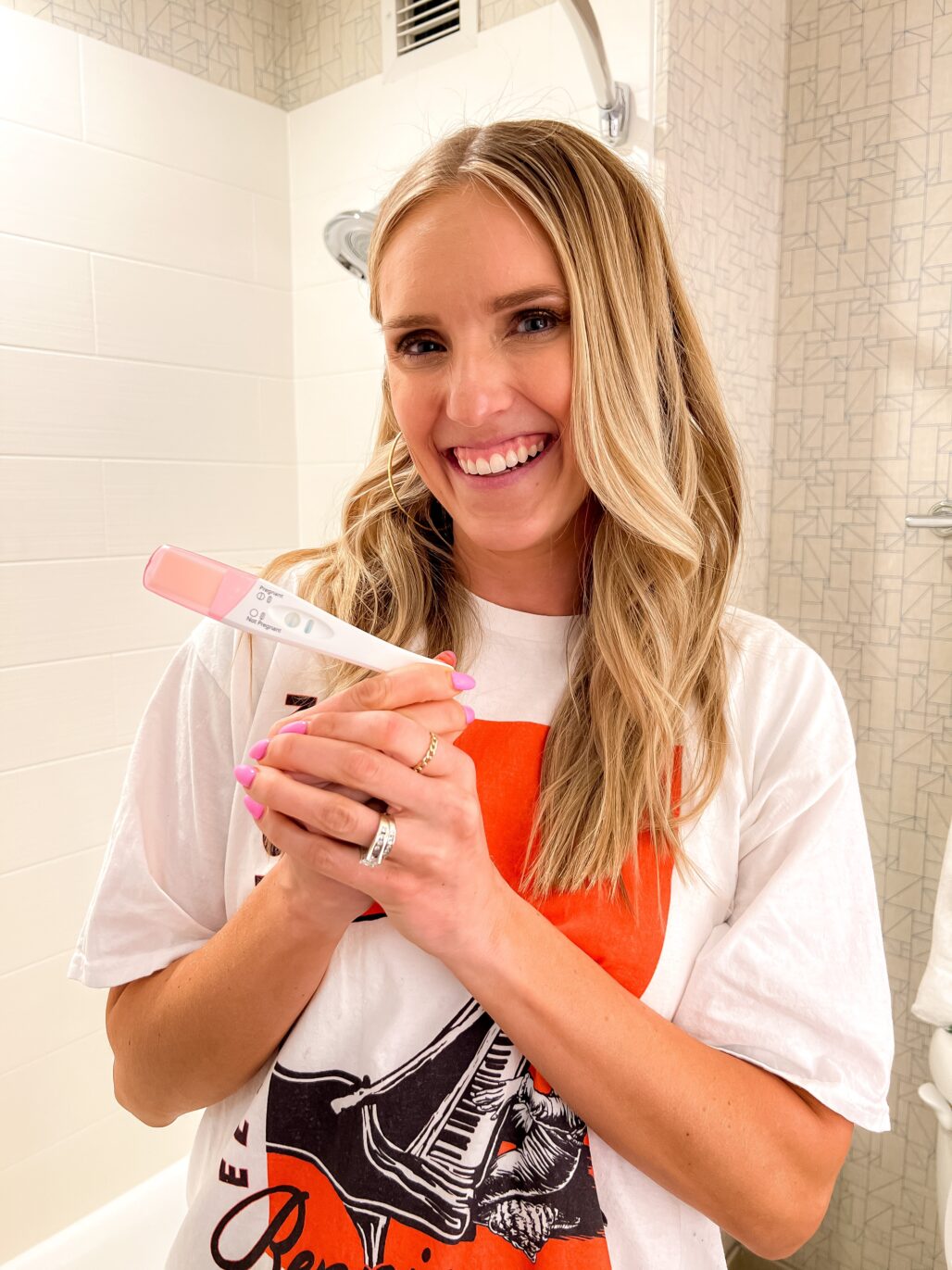 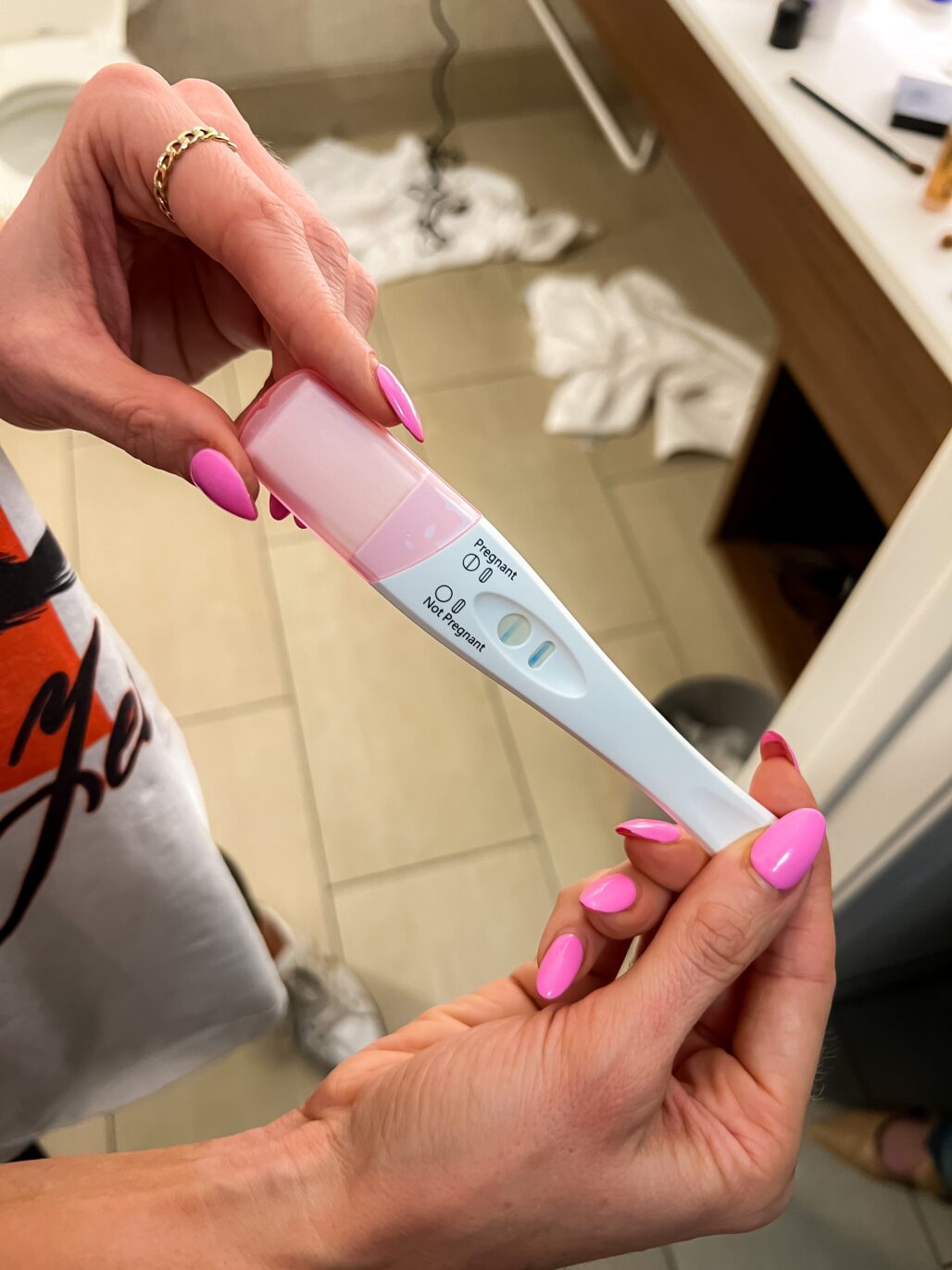 My sister’s reaction was priceless!! 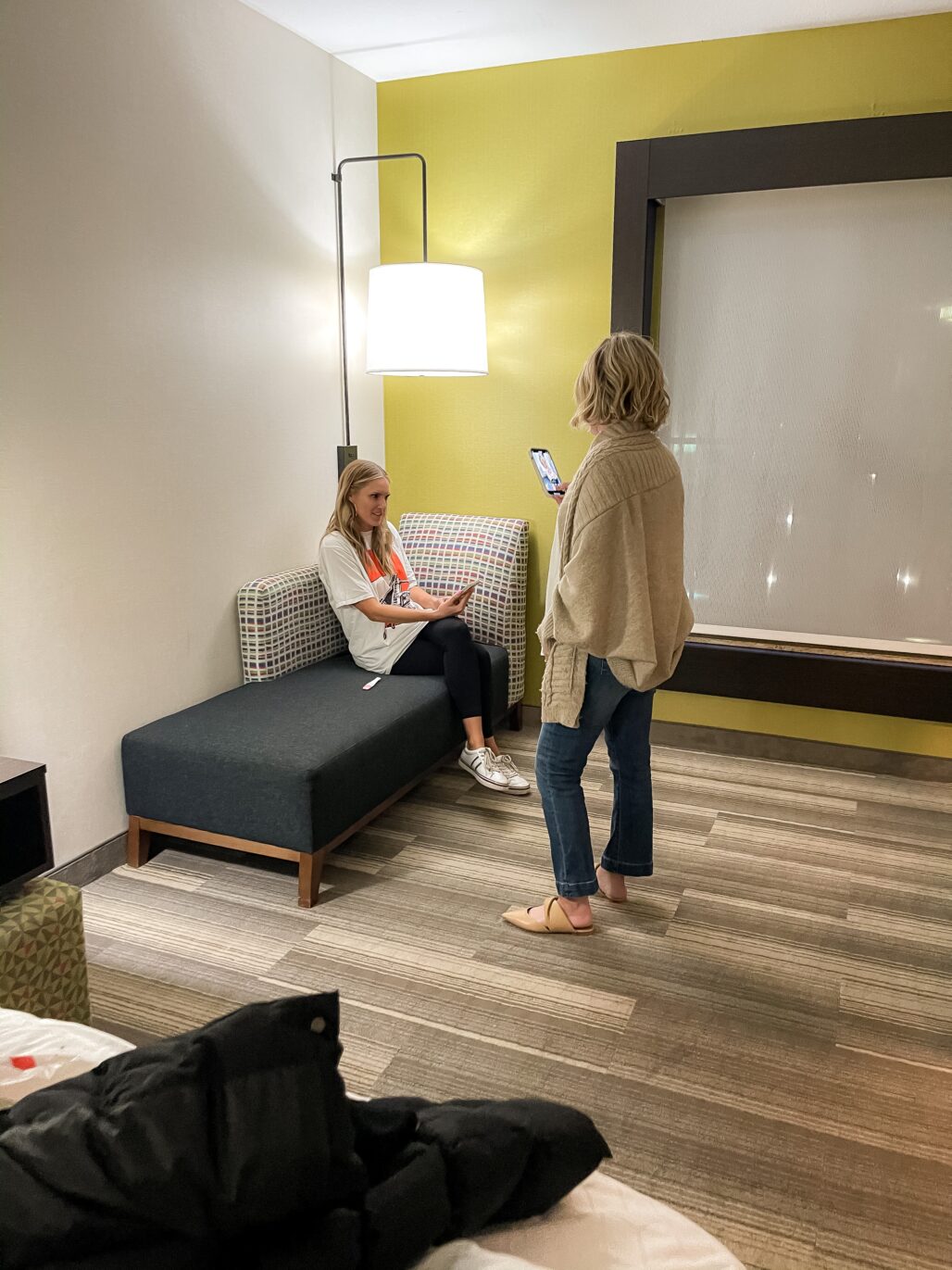 FaceTiming Tyler to tell him I am pregnant!! 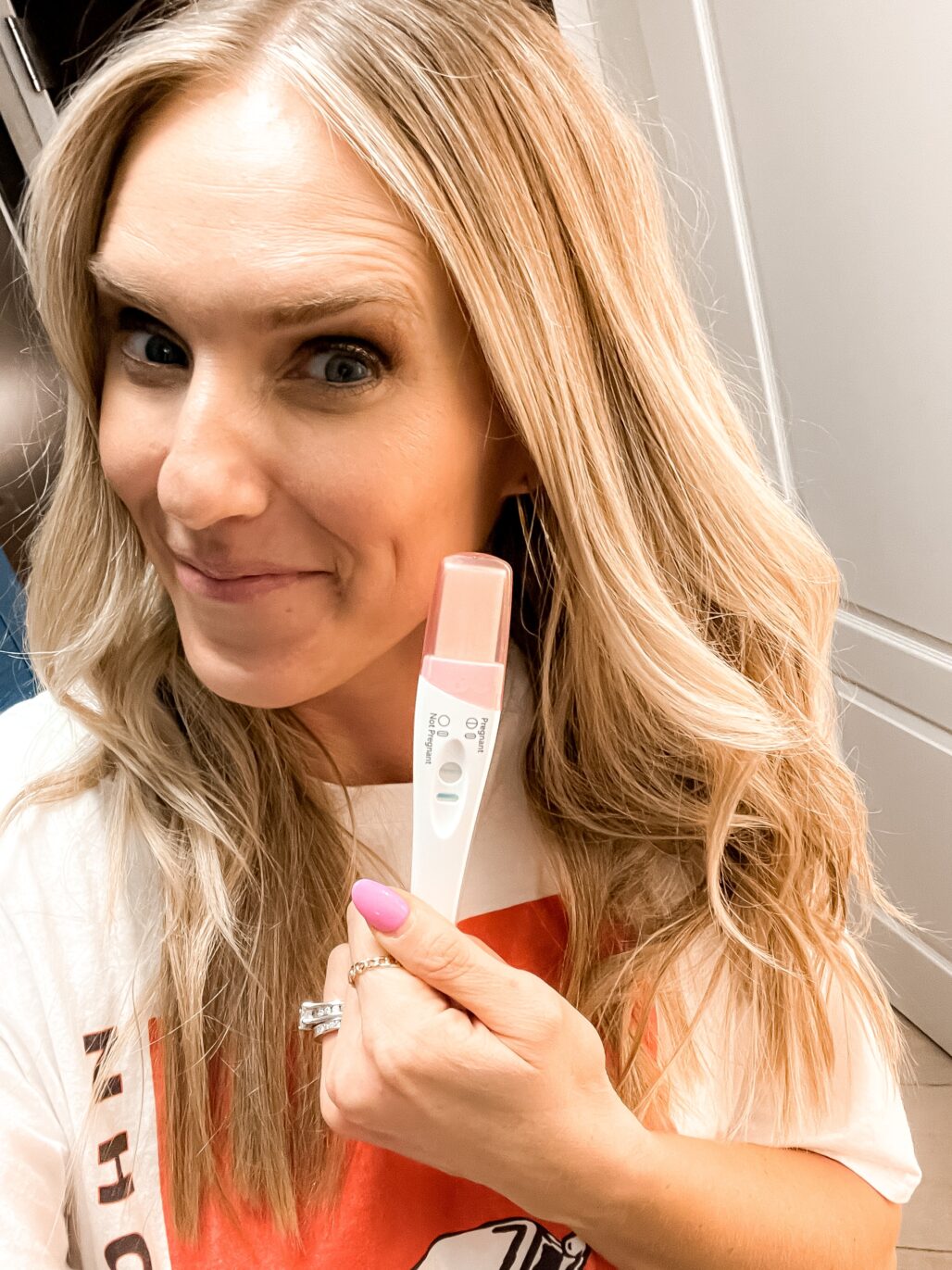 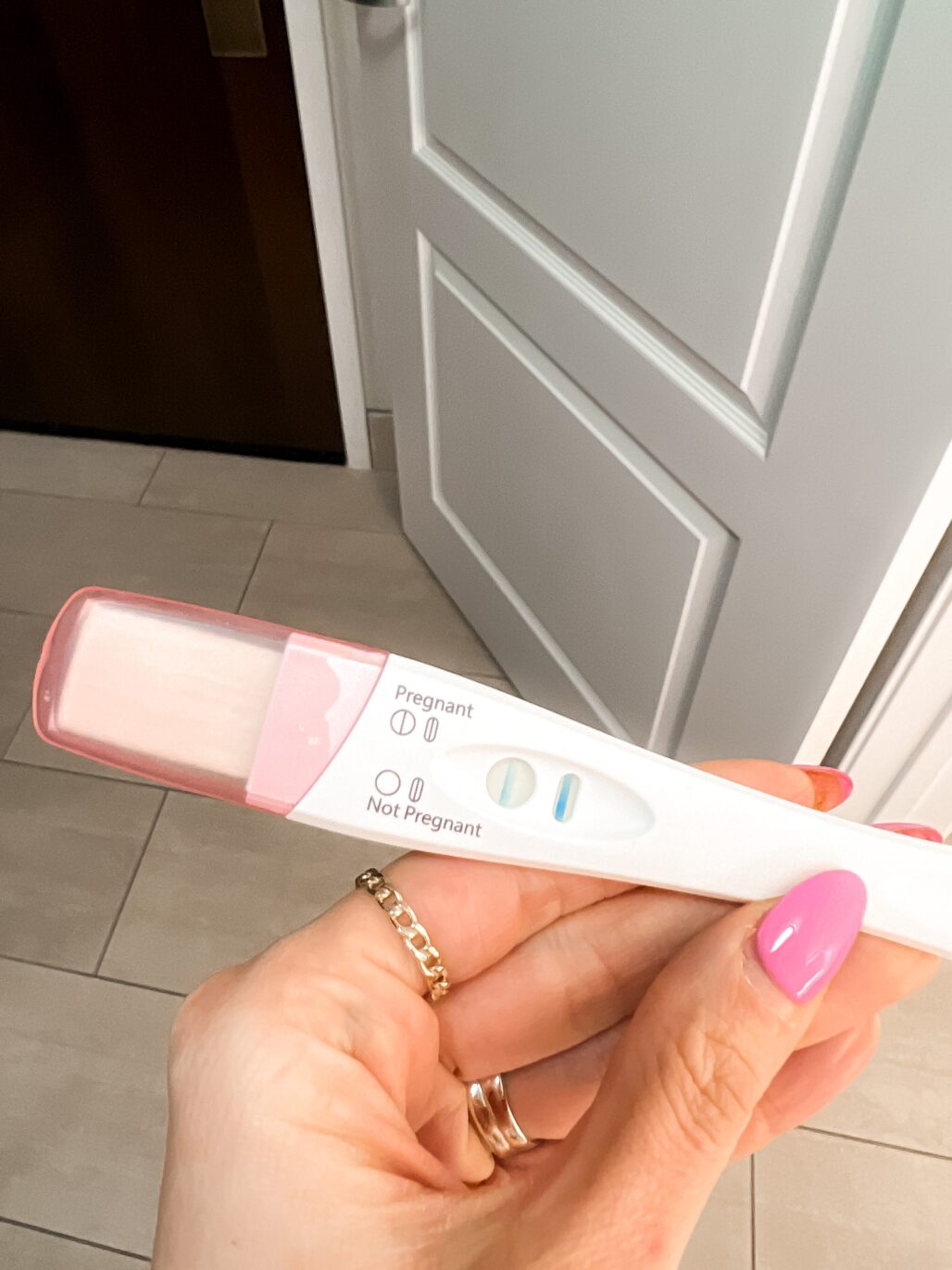 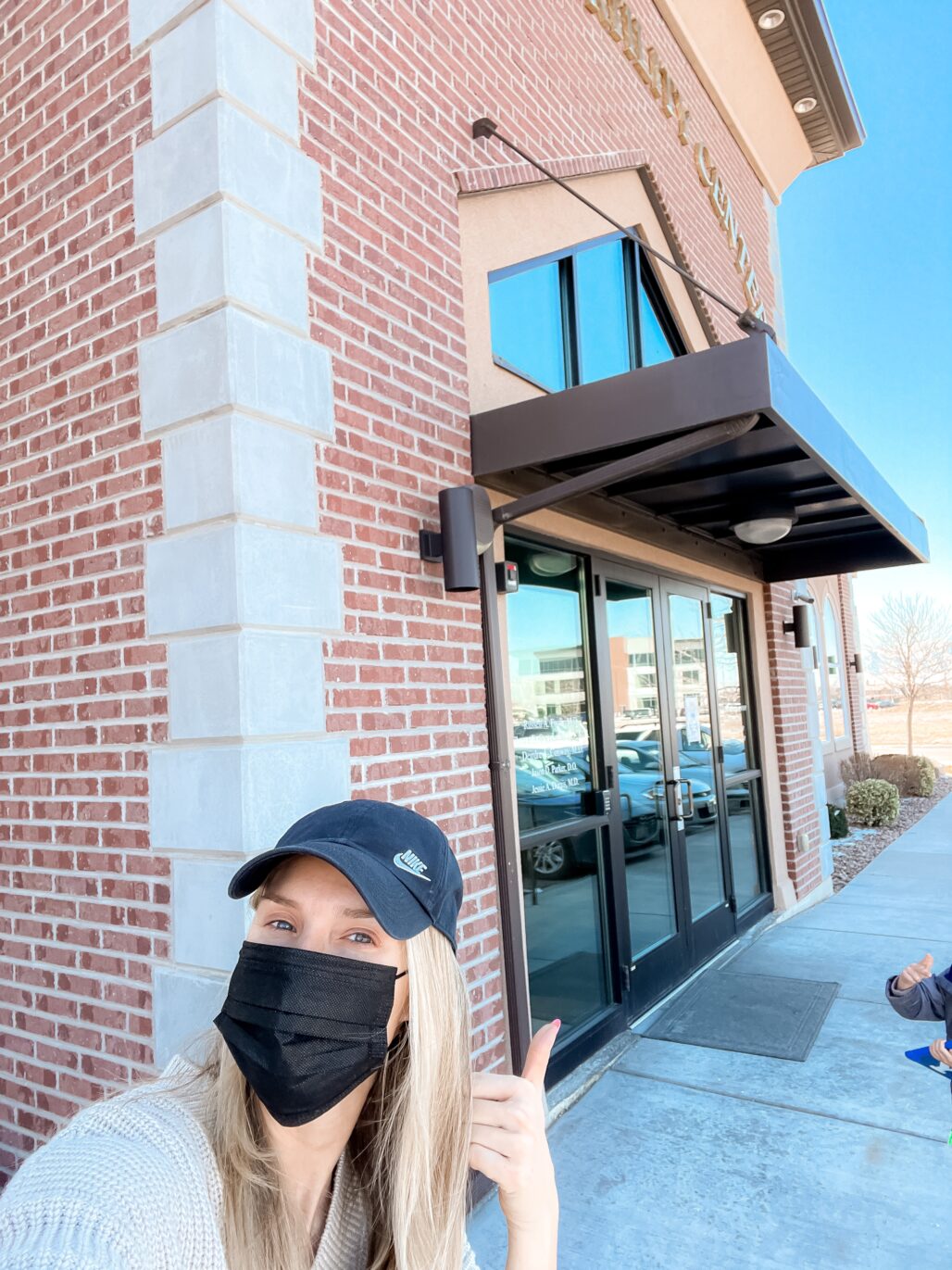 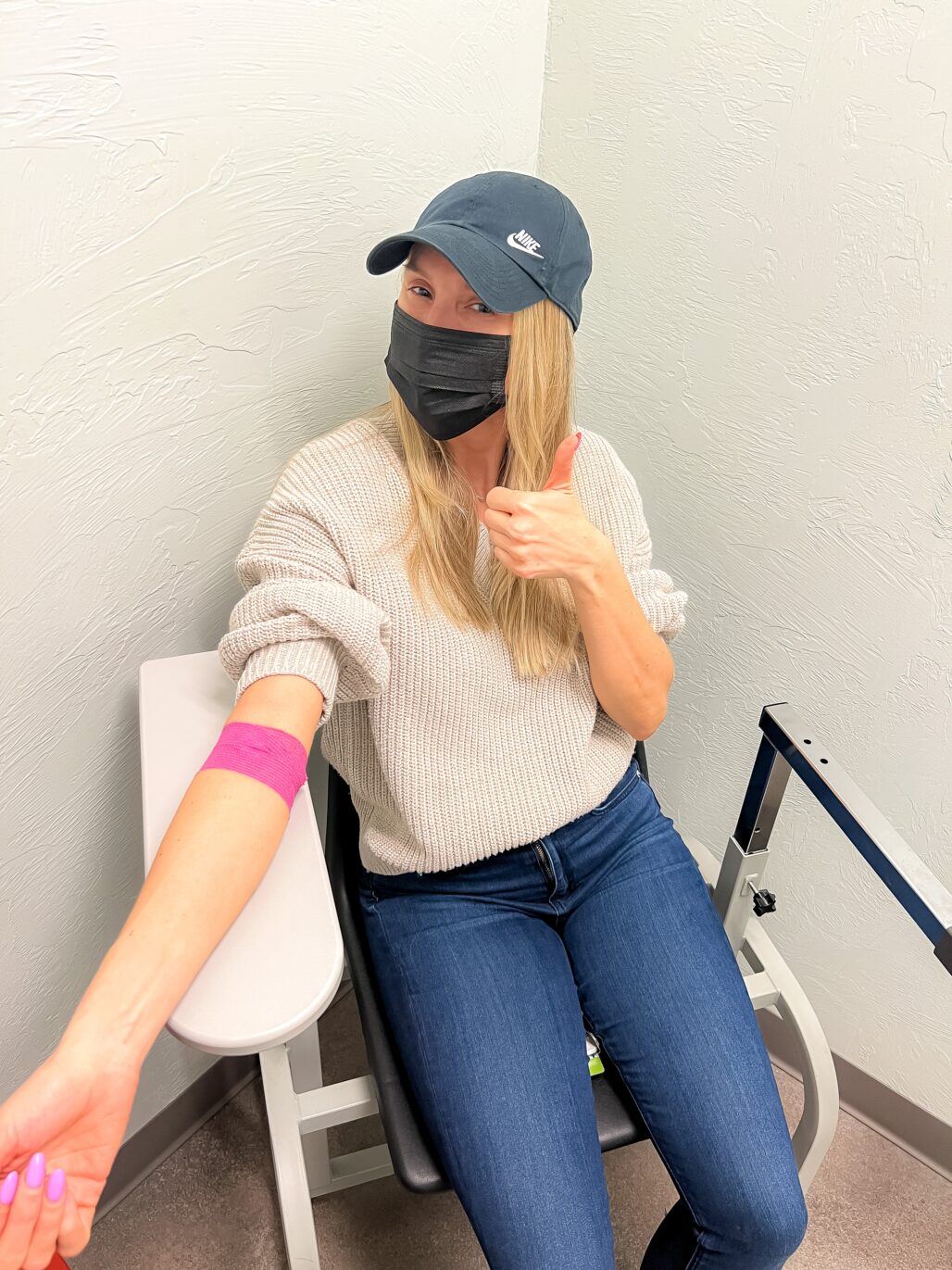 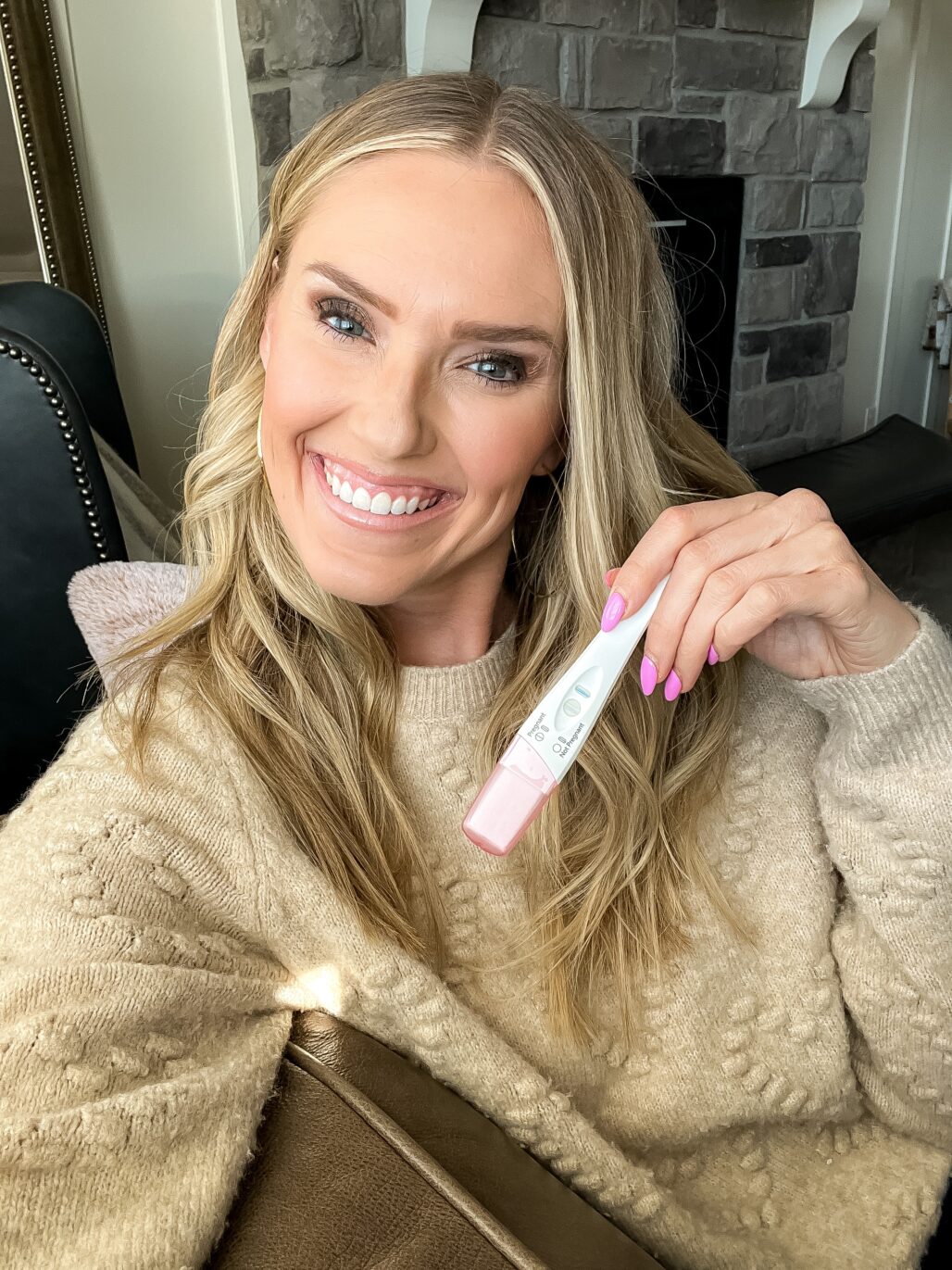 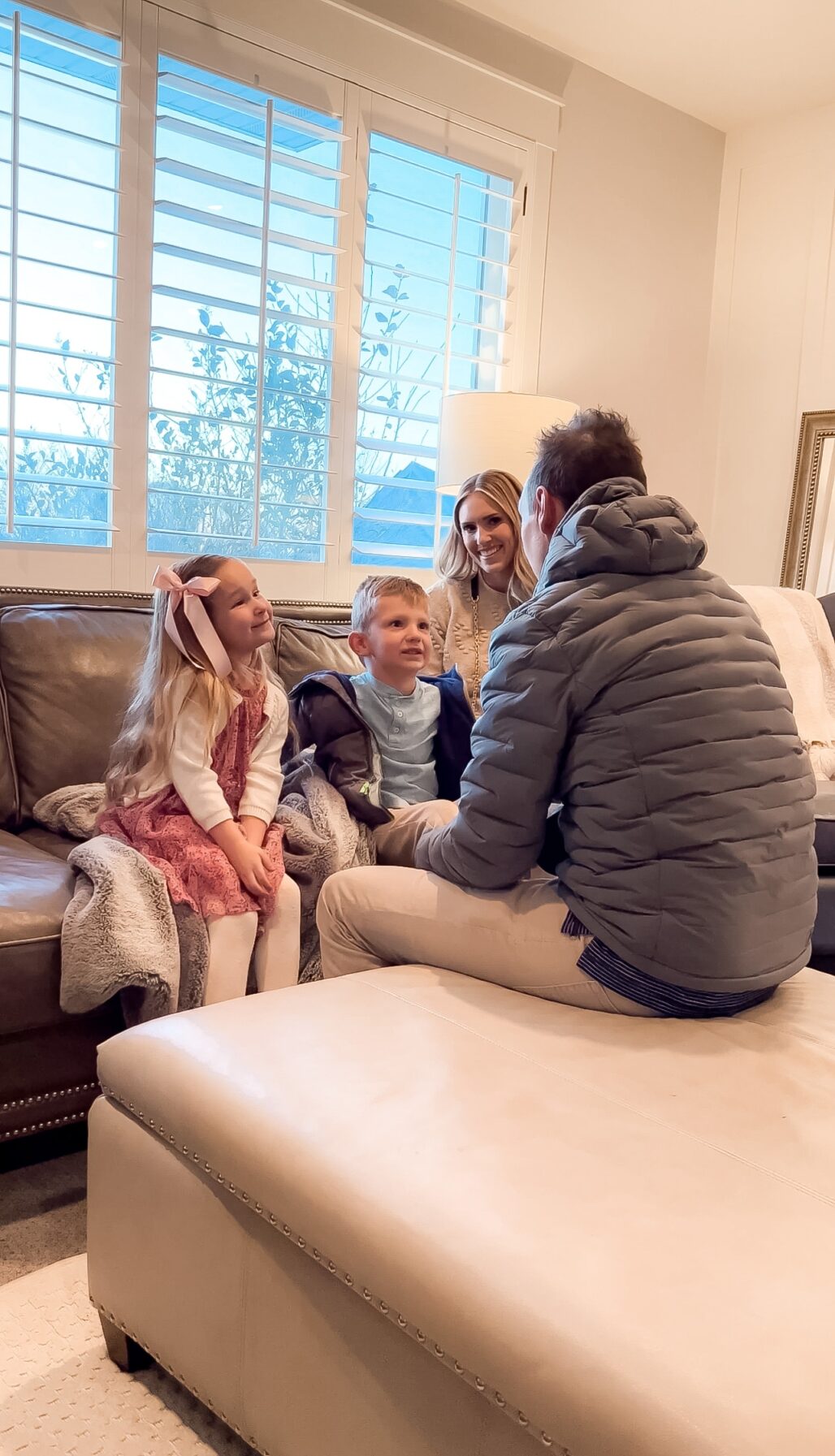 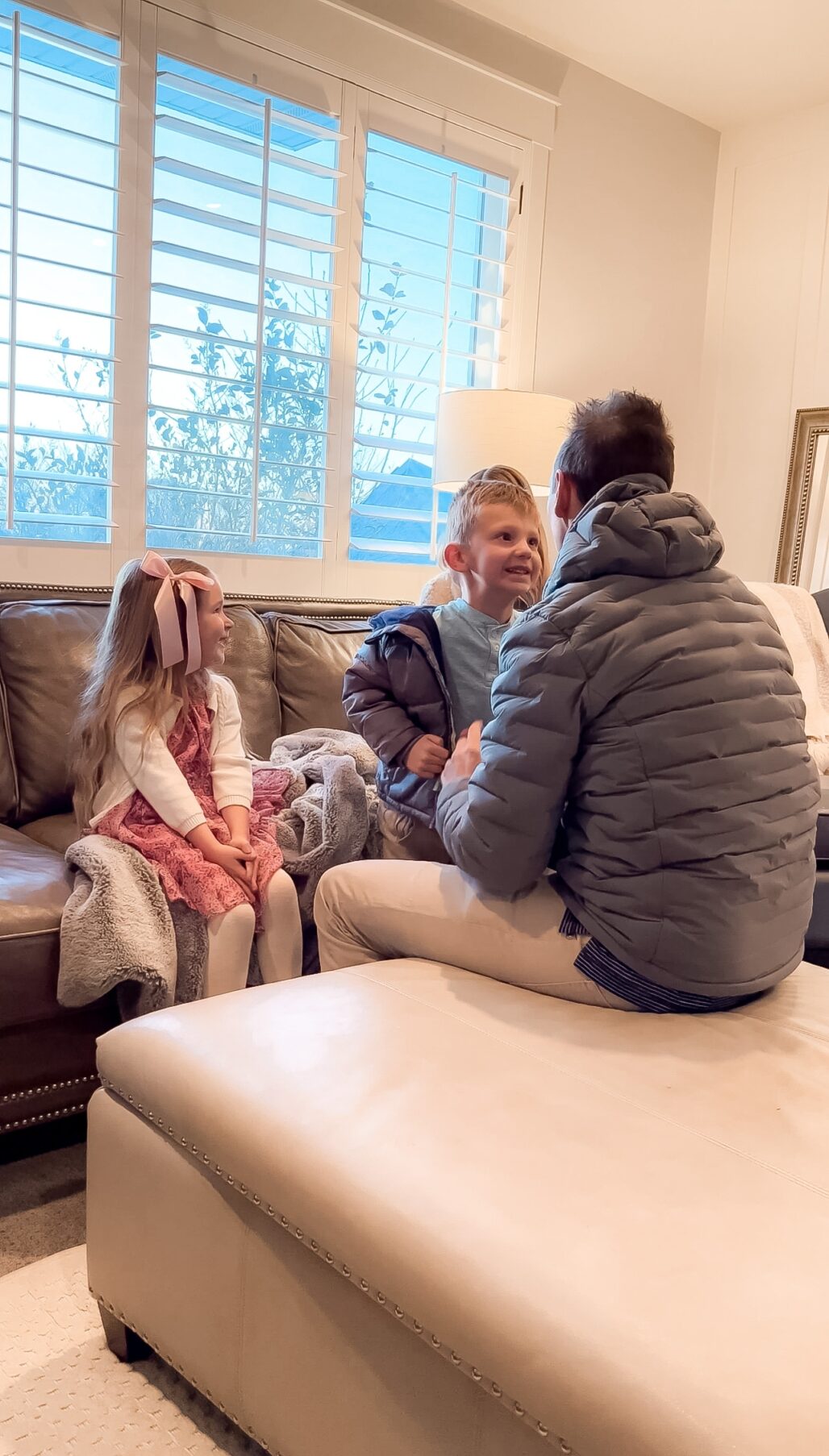 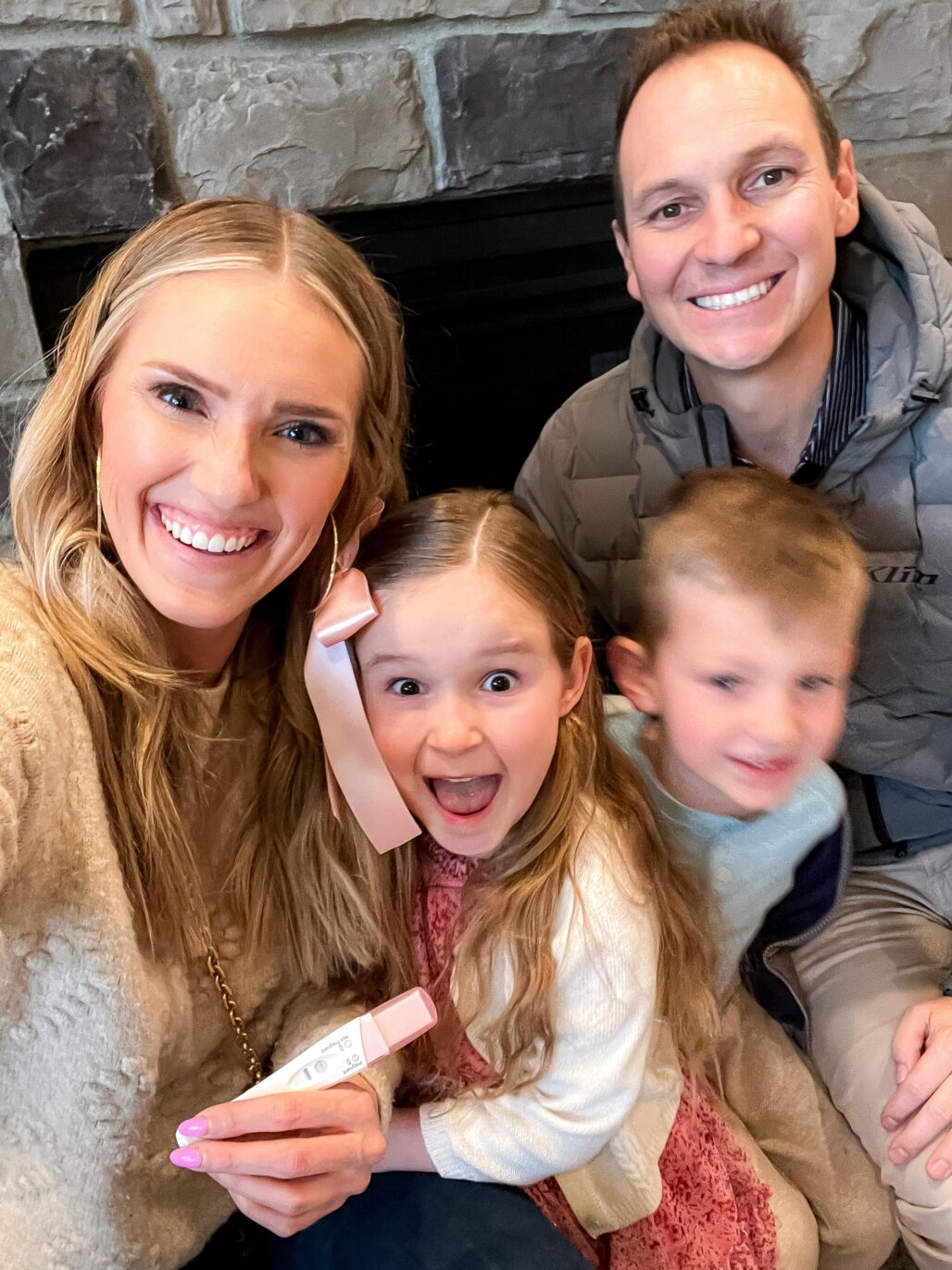 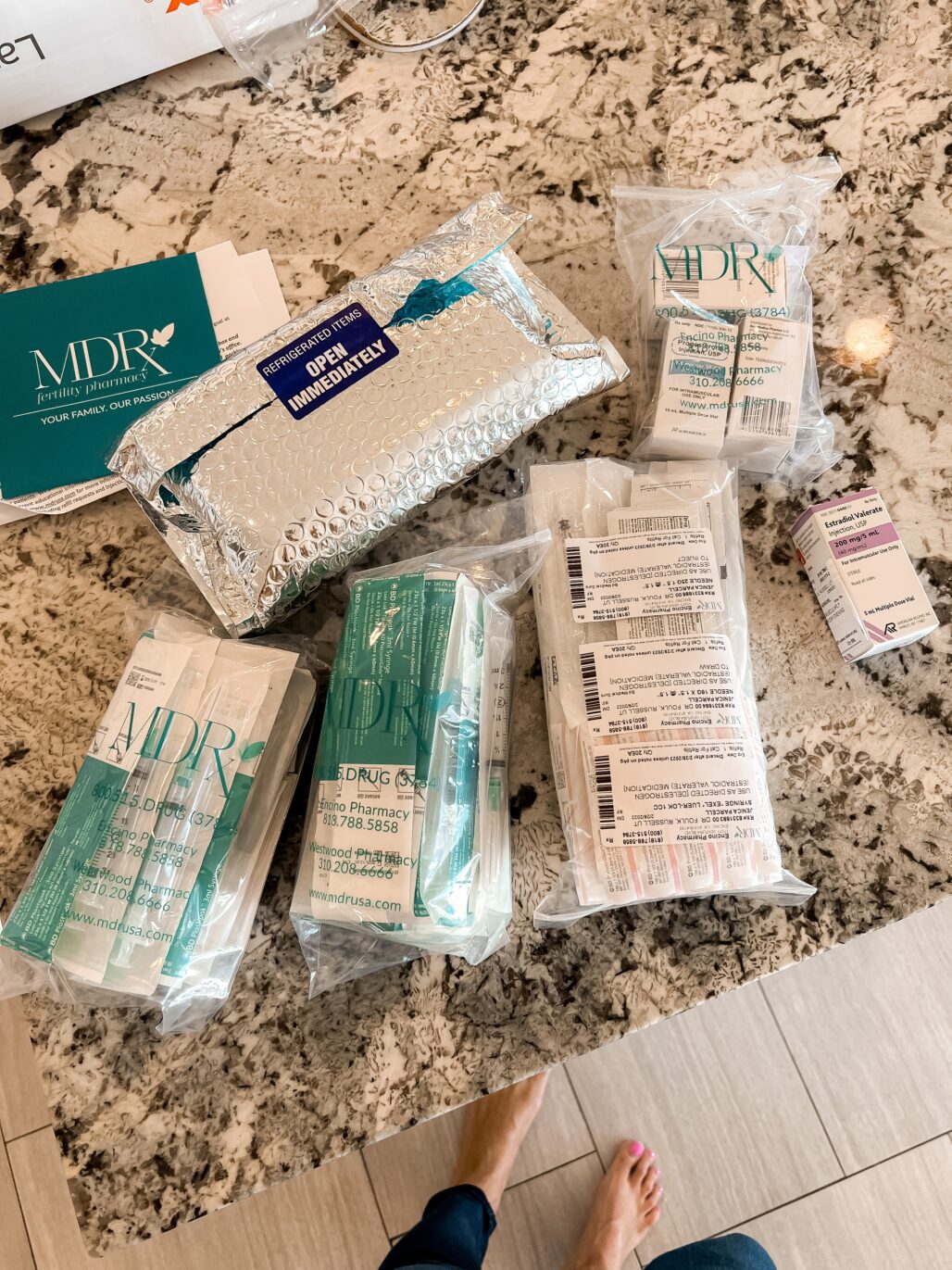 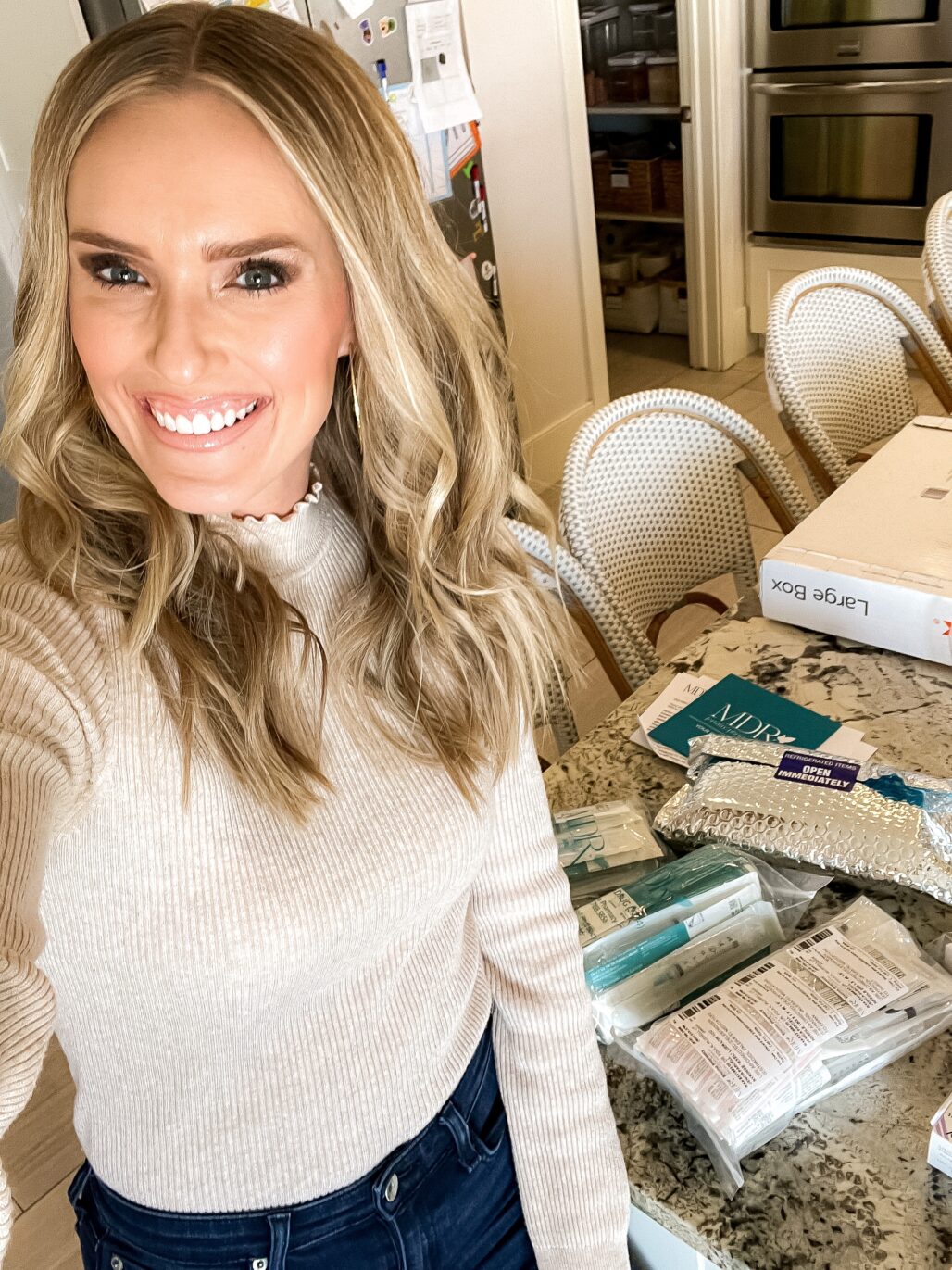